“Loneliness is as bad for you as smoking.”

That’s a rather astonishing claim, but National Geographic explorer Dan Buettner maintains it’s true after exploring the emotional connections among people groups around the world, most especially among the Okinawans of Japan.

Okinawa, Japan, is one of the original Blue Zones longevity hotspots. The Blue Zones are known for their inhabitants who live extraordinarily better and longer lives than almost anyone else in the world. Dan Buettner wanted to learn why, and the presence of moai, or something similar, was a common characteristic.

The Blue Zones defines moai as a group of five friends who “meet for a common purpose to gossip, experience life, and to share advice and even financial assistance when needed.” They are formed intentionally, and children are put in them at a young age. Studies show that individuals typically lose and gain friends roughly every seven years; however, in a moai, the group is maintained throughout a lifetime, around 90 years or more. 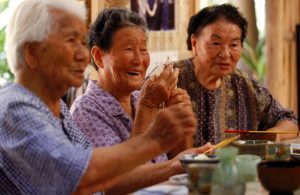 One Okinawan described their relationship this way, ““Each member knows that her friends count on her as much as she counts on her friends. If you get sick or a spouse dies or if you run out of money, we know someone will step in and help. It’s much easier to go through life knowing there is a safety net.”

Belonging to one moai does not limit a person’s participation in another. In fact, several Okinawan villagers have multiple moai’s.  often belong to more than one group. Having more than one moai does not mean they are not loyal to each one. Instead, it manifests how groups are formed over a mutual interest, be it large or small.

In Okinawa, some moai are based on the food they grow. At Body Moves, moai form the basis of our Small Group Personal Training program. Small groups of moai also form organically among our other students.

One of the Body Moves Core Values is:
“We value quality in relationships.”

At Body Moves, community is intentionally cultivated as we firmly believe that social groups are an essential part of well-being. That is one of the reasons we are hosting the Blue Zones 6-Week Challenge Course. 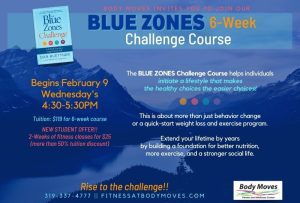 During the course, students will meet weekly on Wednesday’s at 4:30PM for six weeks. Using one of Dan Buettner’s books as a text, the group will learn more about key characteristics of Blue Zones groups and take specific, practical steps in order to micmic and build those same characteristics into their lives. Who doesn’t want to live a healthier, longer, happier life?

So what are you waiting for!?